THE CORK BUSINESS AND SHIPPING LEAGUE will celebrate its 70th anniversary in 2022. The management committee is planning a series of events to tie in with the occasion. At the tail end of the present season, it is hoped that from the beginning of July onwards, and in accordance with the health guidance at the time, that in person events such as a quiz, dinner function and a special anniversary book launch may be allowed to take place.

The Cork Business League has been a huge part of the fabric of Cork sporting culture for many years. Although it is currently the smallest league in Cork behind its influential bigger brothers, the Cork AUL, Munster Senior League and West Cork League, the smaller sibling has finally come of age after an eventful upbringing which began along the banks of the Lee with just eight teams back in 1952. The present committee led by dynamic secretary Peter Travers is well geared to propel the league to new heights and safeguard its future. 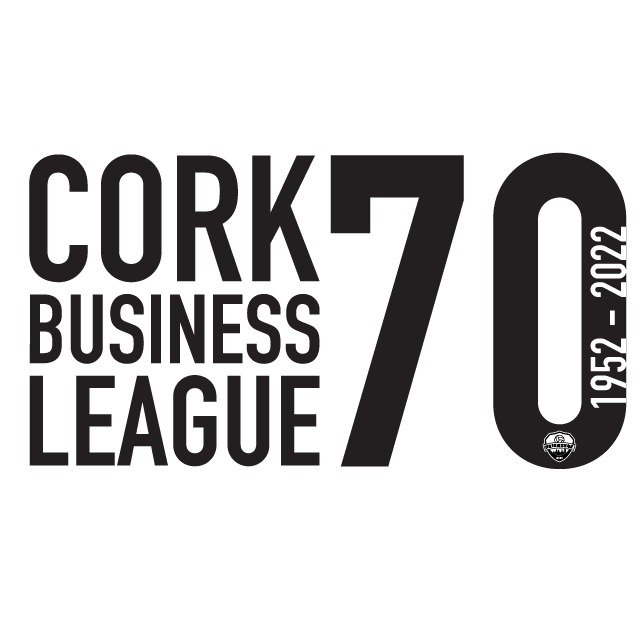 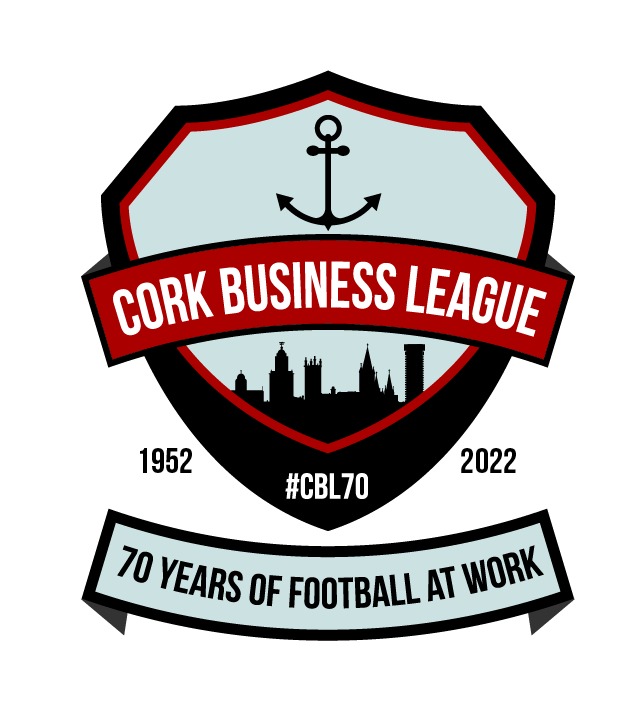 The above is a specially commissioned anniversary CBL crest with our iconic anchor, which dates back to the founding days of the Cork Shipping League.  The light blue colour is included because a 70th anniversary is celebrated with a “diamond white” colour. The hashtag #CBL70 represents our online presence and for which we will be using throughout the year for any online posts about our celebrations. 70 years of Football at Work was the tagline used for our 50th, back in 2002, so we have continued with this consistent message. The crest also shows the 1952 and 2022 years outside the main emblem.

While most people would happily settle into retirement and enjoy the fruits of their well earned pension at the age of sixty-six, the Cork Business League, which celebrates it’s 70th birthday this year,  will have no such thoughts as it seeks to expand and return to the era when thirty-six clubs participated for more than a decade in the 1980’s.

The uniqueness of this small Cork junior soccer league continues to fascinate.  It has reflected like no other sporting organization the broad trends in the economic life of the Cork region for over half a century. From humble beginnings, the foundations of the league were laid way back into the late forties.  A number of companies engaged in trading through the Port of Cork (hence the use of the word ‘Shipping’ in the original title), organized a knock-out competition to run between February and April.  Steampacket, Cork Harbour Commissioners and Fordsons were three of the original teams who took part and eventually the league was granted full junior status before the 1952/53 season with affiliation to the Munster Football Association.

With the city’s two League of Ireland senior teams, Cork Athletic and Evergreen, at the height of their powers, the local football landscape was served by no fewer than seven individual leagues, the Cork District Shipping League being the newest entrant. Some prominent referees of the era including Timmy Kelly (father of Pat), Rory O’Connor, Sylvie Groeger, Sammy Allen, Nedser Cotter and Jack Baylor lent their considerable experience to the development of the game throughout the city and county.

Clayton Love, C.H.C., Steampacket, Fordsons, Sullivans and Farm Products were the six teams who competed in the first league championship which was won by Cork Harbour Commissioners. The mainstay of the league throughout the fifties would have been huge employers like Fords, Dunlops, Doyles Stevedores (the dockers) and Innisfallen, before the emergence of meat processing companies like Denny’s, Lunhams, Farmer’s Union and Evergreen Bacon Factory began to dominate in the late sixties and early seventies.

The football bug began to work its way into the inner city through teams like Postal Workers , CIE CMP, Kincora and Youghal Carpet Yarns, Irish Steel, Cork Spinning Co. , Aer Lingus and Murphy’s Brewery before the banking industry, through Allied Irish Banks and Bank of Ireland,  and the department store, Roches Stores began to take up the mantel in the late seventies.

The representation of computer and pharmaceutical companies reflected the changing winds of industry in the eighties with the emergence of firms like Pfizers, Novartis, Janssen, Concurrent Computers, Motorola and EMC. Cork County Council remain the longest-serving team in competition today, joining the league back in 1980. It can be said that as companies prominence waned, their team’s departure from the league often predicted the eventual fate of the company in Cork. While in most other leagues nationwide, when the post-mortem finishes in the local watering-hole after the game, the players go their separate ways. However, the CBL allows for the post mortem to continue right through the working week, which helps to create a bond of friendship not alone among team-mates but also among opponents.

The League has been excellently served by two secretaries for almost its entirety, first Mick Mooney, from 1955 to 1987 and Peter Harrington until he moved upstairs to be succeeded by Peter Travers.  Mr. Mooney, whose untimely death occurred in 2007, was a well respected administrator, while Peter Harrington’s diligent work was rewarded with elevation to the posts of Chairman and Vice-Chair of the MFA. Other officers to have served with distinction since the League’s inception have been, Jack Sullivan, Jack Fitzgerald, David Lynch, Fred Hickey, Bobby Humphreys, Stevie Murphy, Jackie Carroll, Mick Glennon, Jackie O’Driscoll, Pat Greaney, John Falvey, Noel Lynch, Jimmy Kelleher, John Leonard, Aidan Holland, Adrian O’Leary, Frank Linehan, Bertie Meaney , Ken O’Callaghan and Tadhg Leane.

As the country battles with the current COVID pandemic, the much respected league which has seen its share of ups and downs is confident of further expansion in the years ahead and looks forward to the heady days of the mid-eighties when thirty-six teams graced the three divisions of twelve.