It has been a roller coast last six months for the north side hopefuls whose journey in both the New Balance FAI and Munster Junior Cups competitions began back in late September with the 6-1 victory over West Cork League opponents Castlelack at Lauragh Industrial Estate, Bandon in an FAI second round tie. After Kevin Finn put the hosts one up in the 15th minute, James Cotter tied up the contest ten minutes later. Cotter turned provided by setting up Stephen McCarthy for a second for Doolan’s before the former grabbed his second in the 40th minute. Jamie Murphy put the tie to bed early in the second 45 with the irrepressible Cotter completing his hat-trick from the penalty-spot and Murphy adding a sixth with five minutes remaining.

Two weeks later, on Sunday, October 13th, Doolan’s knocked out fancied AUL Premier A opponents Glen Celtic 3-2  in round three of the FAI courtesy of goals from Liam Horgan (2) and Cotter before the Munster Junior came around with an away trip to Brigown Pk., Mitchelstown to face Park United. If Doolan’s go any further in this season’s competition, they will look upon this tie like the one which laid the foundations of what was to come. Trailing 4-1 with ten minutes remaining to goals from Paul Masterson (2), his brother Dave Masterson and Dinny O’Dea, Stephen Wall Heffernan inspired a sensational comeback to make it 4-2 on eighty minutes. Goals from Stephen McCarthy and James Cotter, two penalties either side on the 90th minute, after Cotter opened the scoring in the 20th minute, completed a remarkable 5-4 triumph at the death.

Business League opponents UCC United were next to fall in the FAI, losing 4-1 to goals from Cotter (2), Aaron Hennessy and Jamie Murphy before the Munster Junior threw up Munster Junior League Premier leaders Everton in round two. Once again, the Cow romped to another resounding 6-1 win, with Murphy (3), Cotter and Hennessy among the goals.

An away trip to Leeds Park to face another Munster Junior League side in Leeds, again in the Munster Junior, resulted in a hard-fought 2-1 win, Tony O’Reilly and Jamie Murphy among the goals for the winners whose next opponents came in the FAI, Dublin based Valeview Shankill making the trip south only to leave empty-handed following a 3-2 defeat. Aaron Hennessy popped up with the winner after O’Reilly and Murphy had exchanged goals with Paulie Murphy netting twice for the visitors.

The FAI journey ended in the last 32 but not before Doolan’s gave 2005 winners Westport United the fright of their lives by going two up through O’Reilly and Hennessy only to lose with the last kick of the game. The Munster Junior came thick and fast with Limerick Desmond League leaders Glin Celtic losing by the narrowest of margins to a James Cotter goal in the 88th minute. Doolan’s rewarded was a plump away tie to local AUL rivals Village Utd. at Mayfield Pk. on Sunday, February 16th.

The Cow stormed back from 3-1 down at half-time in wind and hailstone to lose in extra-time 4-3 but a successful appeal against a cup-tied opponent kept the dream alive with another mouth-watering home tie, this time against Waterford District Junior League and twice trophy winners, Waterford Crystal. Unfortunately, the cessation of football due to the recent Covid-19 outbreak led to the postponement of the tie until this Sunday, 2nd August.

Doolan’s Cow FC was formed in 2005 by Eamonn and Ciarán Murphy and entered the Cork Business & Shipping League in 2005/06 under the name of Island Tavern. The club won the O’Driscoll Premier Cup in 2008/09 beating Fermoy /Nissan MCM 5-3 in the final at Turner’s Cross on Tuesday, May 26th. After Jerry O’Reilly edged MCM in front in the 34th minute, James Carroll levelled only for O’Reilly and Barry O’Donovan to exchange goals before the 71st minute.  Carroll gave Tavern the lead minutes later only for O’Reilly to pounce with his third o f the night. Inspired by O’Donovan boundless athleticism, Peter O’Keeffe added two more in the last five minutes to delight manager Denis O’Sullivan who commented afterwards, ‘ When you consider we have a very young team, we did very well indeed.’

A name change to its present one of Doolan’s Cow brought a change in fortune and a first Mooney Cup Final appearance in 2012/13 where EMC ran out winners.  The league and cup double was achieved in 2015/16 with the club’s most memorable and successful season to date coming in 2016/17 with the acquisition of all four domestic trophies, equalling Youghal Yarns’  feat of 1992/93.

The club won the championship for a third time last season and are on course to make it through to a fourth consecutive shield final. Denis O’Sullivan, Wayne Kavanagh and Robert Graham currently manage the team who play their home matches at Mayfield Community School (All-Weather).

The Early Years.
Waterford Crystal Football Club was founded in 1971 as an offshoot of the glass manufacturing plant in the city. While no official link existed between the football club and company, the latter provided playing facilities for the club at the newly formed Waterford Crystal Sports Complex in Ballinaneesagh. The inaugurating members at the club’s first meeting included Tom Hogan (Chairman), Pat Kelly (Secretary) And Patrick ‘Dando’ Kelly (Treasurer). Other committee members included Morris Flynn, Dick Phelan and Bobby O’Keeffe.

At the start of the 1977-1978 season, the club appeared for the first time in the expanded Waterford Premier League. Success at youth level, and for Second and Third Division sides followed throughout the 1980s including a TSB Cup. Schoolboy football also commenced in the 1980s and in 1989 the club won its first Schoolboy League title, winning the Under 11B League under the management of Liam O’Rourke and Michael Butler.

The Nineties
The 1990-1991 season proved to be a momentous one for all involved with the club as we were crowned Premier League Champions for the first time, just two decades after formation. A 3-1 win in Ferrybank on the final day was enough to see the trophy arrive at the Complex for the first time, thanks to goals from Brian Foley, Kevin Halloran and Clyde Casey.

Two years later (1992-1993 season) the club enjoyed one of its most successful seasons ever. The Premier Team won the Ardagh (Premier) Cup for the first time, while two Second Division leagues were secured. The Premier League title returned for a second time at the end of the 1993-1994 season under the management of Johnny Matthews, with the team undefeated during the entire league campaign. A historical double was then completed following victory in the TSB Cup. The League title was successfully defended the following season, resulting in three league crowns in five years, this time under the stewardship of another Waterford soccer hero, Alfie Hale,

A sunny evening during May 1996 in Ozier Park was the scene of one of the greatest nights in the history of the club as we appeared in our first Munster Senior Cup Final. Despite facing a Cork City side captained by Dave Hill and boasting a host a League of Ireland players, a 24th-minute goal by Davy ‘Squealer’ Walsh was enough to win the game. The club today is just one of three junior teams to win the competition.

A third league title in four years, and fourth in all, arrived in May 1997 under the management of Paddy Allen. The following season, Eamon Coady took charge of the Premier Team and led the club to the first of three FAI Junior Cup Final appearances to date. Success would not follow as we came up against an excellent Fairview Rangers side who won the game 2-0. A second Ardagh Cup did provide some consultation, courtesy of a Trevor Dempsey goal. This was the first of three Ardagh Cups in as many years with success again in 1999 and 2000.

The Noughties.
Two Ardagh Cups in 2000 and 2001 brought a great start to the new millennium. The cup had found a home at the Complex having been won for four straight seasons (1998 – 2001). In 2003, we almost won our fifth league title, finishing runners up, under the management of former player Gary Coad. The 2004-2005 season saw another former player, Brendan Rae, take the reins. Just like in 1998, we reached the FAI Junior Cup Final, however, the outcome in the final was the same. Another 2-0 defeat, this time at the hands of Westport United in Buckley Park, Kilkenny.

Not to be denied, we reached our third FAI Junior Cup Final in 2006 under the management of Niall Hogan and Davy Walsh. This time we would not be the bridesmaids. A goal five minutes from the end of extra time by Jason Halloran saw the cup head back to Waterford for just the fourth time in its near one hundred year history. The following week our Under 16 team defeated Belvedere of Dublin in the AUL on penalties to win the Barry Cup. Mitchell Casey had the remarkable honour of playing in both games.

This decade also saw our first appearance in the FAI Senior Cup. In 2005 we defeated Bonagee United from Donegal 2-0 in the first round of the competition. Round Two saw us drawn away to FAI Cup holders Longford Town. That tie was staged in Flancare Park and saw the home side run out five-nil winners. In 2006 we again progressed to Round Two, this time defeating Leinster Senior League side Garda FC 4-1 in Waterford. The second round again saw us face one of the big boys as we travelled to Dalymount Park to take on Bohemians. Having taken the lead in the first half thanks to a Joe Watson goal, the home side rallied and eventually ran out 3 – 1 winners.

A fifth league title was secured in the 2007-2008 season. The final points won against Bohs at the Complex on a scoreline of two goals to one. Joey Watson scoring twice for us.

A New Era
The closure of the Waterford Crystal manufacturing facility at Kilbarry in January 2009 led to uncertain times for the club. We were forced to leave our home of more than forty years and moved to the Waterford Regional Sports Centre (RSC) for the 2013-2014 season. Success has followed with league and cup titles won by the Forth Division team under the guidance of Mick Cummins.

In May 2018 we lifted the Ardagh Cup for a 6th time, bridging a gap of seventeen years. The victory was secured in Ozier Park following a penalty shootout win over Carrick United. In August 2018 we were on the move again and left the RSC to move to the nearby Crystal Bowl (formerly Bolton AFC). In December 2018 the venue was formally opened by the CEO of the Football Association of Ireland, John Delaney.

Johnny Gleeson is currently in charge of our Premier Team and joins a list of former Waterford United managers such as Alfie Hale, Johnny Mathews, Seamie Coad, Brendan Rae and Paul O’Brien in managing our first team. Our Premier Team won back to back Ardagh Cups in 2018 and 2019, bringing our total number of Ardagh Cups to seven!

The Cork Business League and the Waterford District & Junior League wish both teams the best of luck this weekend.

Attendance Details: Max 200 including all players, management and match officials

Entry Fee: €5
Social distancing measures will be implemented on the day to ensure the safety of all attendees.
Please read the CBL’s COVID-19 Support page for latest updates on the FAI’s measures put in place for a safer return to playing: 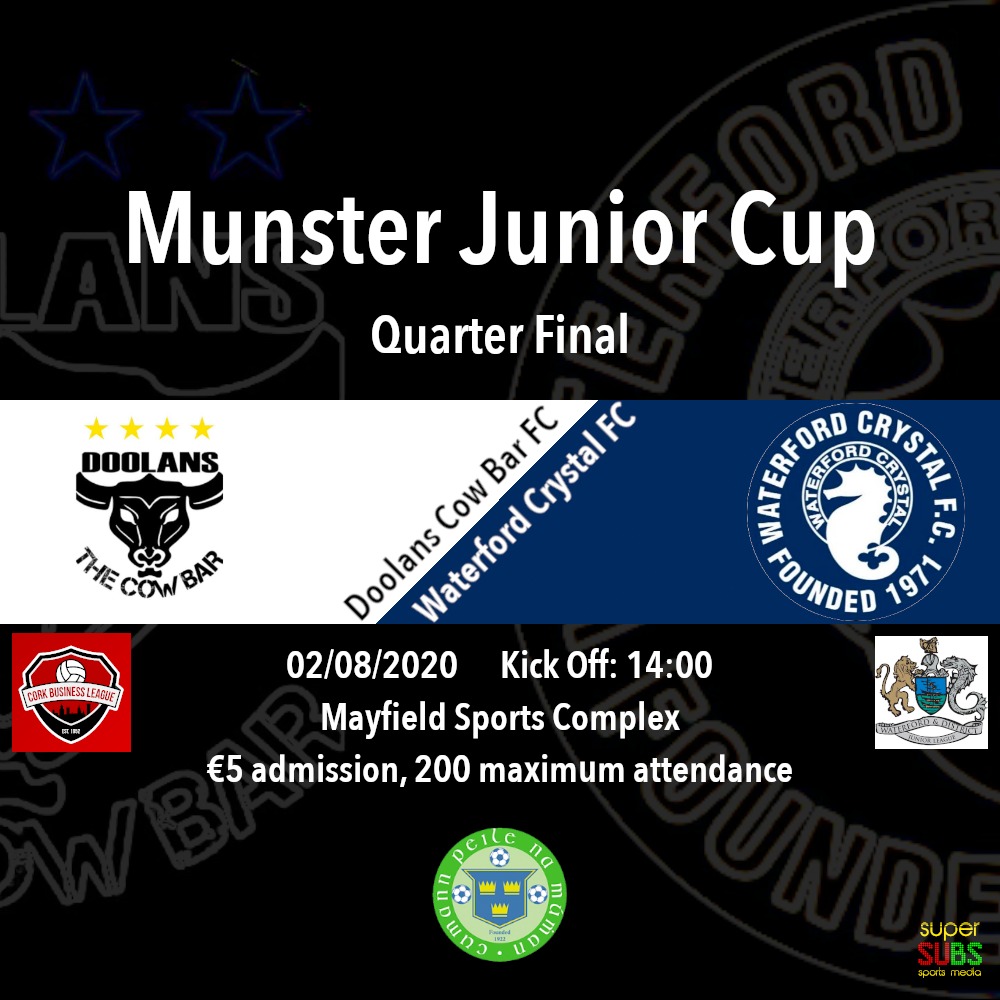