? The Smurfits FC squad pictured before the First Division play-off encounter with Roches Stores at Turner’s Cross on Sunday, May 12th 1996

SMURFITS participation in the Cork Business League lasted only eight seasons, but the First Division championship success of season 1995/96 has left an undeniable memory for all who witnessed an incredible achievement won against the greatest of odds and a victory snatched from the arms of two of the most formidable teams to have graced the league, record title winners Postal Workers and an emerging Roches Stores, writes Finbarr Buckley.

On Sunday morning April 14th 1996, with two rounds of matches remaining, Smurfits faced the Workers at Smurfit Park in the knowledge that even a win might not have been sufficient to stay in the title race, and looked the least likely of the three main protagonists to capture the title. Few teams had come straight up from winning the Second Division Championship to land the top honour at the first attempt, but this Smurfits side, under the astute management of the wily Dave O’Connell and assistant Denis Cambridge, had already demonstrated the ability all championship-winning teams needed, to bounce back from the adversity of defeat, and apply a winning form at the key moments of the season when your nearest rivals begin to flounder.

The top of the table was finely poised with king-pins Postal Workers in pole position knowing that three points against Smurfits and a further three points against second-placed Roches Stores would land a record-breaking fourteenth championship. Roches were enjoying their best season to date, chasing the elusive double under the experienced management of former players, Thomas O’Donovan, Noel Cummins and Anthony O’Reilly, and with Postal and the Naval Services to play, had the destination of the title firmly in their own hands for the first time in twenty years.

The corrugated packaging firm had been promoted at the tail end of season 1994/95 along with Naval Services, who themselves were to go on and win an impressive Premier title three seasons later in 1998/99. The league campaign got underway on Sunday, September 10th 1995, with Smurfits facing the first big test of the season with the visit of Postal to Smurfit Park. The debutants got off to a flier, winning 2-1, while the following week Roches started their campaign with a comprehensive 4-1 victory over reigning champions, AIB. The last Sunday in September saw Smurfits draw two-two with Apple Computers with Roches defeating 1990 champions, CIE Athletic 2-0 at the Farm. October and November showed both teams in mixed form, allowing Postal a window of opportunity to get back into the championship race, remaining unbeaten right through to Christmas, courtesy of victories over Garda ( 5-2 ), early pacesetters Apple Computers ( 2-1 ), Naval Services ( 2-1 ), Aer Lingus ( 2-0 ) and a two-two draw with ESB. Smurfits did lay down a marker with a four-one home win over Roches on October 15th when the title contenders met for the first time.

The year ended with Smurfits in pole position with eleven games played, three points ahead of Roches with Postal a further point behind. The momentum of form switched to Roches in the New Year, first gaining revenge over the leaders with a four-two win on January 7th, before going on to open a four-point gap by mid-February with home wins over the Workers (2-1, Fergal Ryan 55m. and Tom O’Donovan 58m, Dave Keating with a consolation with twenty minutes remaining ), and Aer Lingus ( 5-1, Ryan 3, and Pat O’Sullivan 2 ). In the interim, promoted Naval Services forced scoreless draws with Smurfits and Postal, but the drama of Roches 3-2 reverse to ESB on February 25th,( John McSweeney, Don Mulcahyand goal poacher supreme Tom Tyrell scoring for the winners, with John O’Neill on target twice for the losers), and Postal’s 3-1 defeat at home to Apple a fortnight later, allowed the Tramore Road company close the gap with goals from Michael O’Mahony and Finbarr O’Neill. Although Mick Crowley pulled one back with ten minutes remaining, the three points were secure.

Roches responded with a three-one win over Garda, ( Noel McCarthy, Tom O’Donovan and John O’Neill scoring before John Long netted in the 69th minute ), but faltered in early April with a two-two draw away to Aer Lingus at Alsaa Park, as goals by Martin Sugrue and Michael O’Sullivan put the Airport in control with Roches relying on a late Pat O’Sullivan strike to gain a share of the points. On the same day, the evergreen John Browne scored the only goal of the match for Postal in the 68th minute to secure all three points away to Garda and make the 13-time champions firm favourites to win yet another title.

Despite losing 2-1 for the second time in the season to Smurfits at Rochestown College on April 14th, the Workers went into their last home match of the season with 32 points from 17 matches, needing a victory over arch-rivals Roches Stores ( 30 from 17) to win the league, while Smurfits waited in the wings with 28 points from 16 matches played. Smurfits scorers in the crunch win over Postal were Fionan O’Neill (12m.) and Finbarr McCarthy (70m ) with Browne again on the score-sheet for the losers.

Grand-slam Sunday turned out to be April 28th with the ESB Grounds and Rochestown College the venues to decide the destination of the championship. Smurfits realized that nothing else but three points would suffice in their clash with ESB, and hope that Mooney Cup finalists Roches Stores could turn the tables on Postal as they did ten years previously in those never to be forgotten Byrne Cup successes of 1986 and 1987. Goals from Owen O’Neill ( 2), Fionan O’Neill, Greg Twomey and Frank McCarthy sealed a comprehensive win for the third-placed visitors, while all eyes were firmly focused on the meeting of first and second a few miles away in Rochestown. Tom Lynch put the league leaders in front on the half-hour, only for Noel McCarthy to equalize five minutes later. Postal’s Liam O’Callaghan seized the initiative in the 51st minute with a terrific long-range strike and with a fourteenth championship less than 25 minutes away, Pat O’Sullivan popped up with a precious equalizer to set up a grandstand finish before an enthralled attendance. The rejuvenated Roches Stores eleven threw caution to the wind and peppered their opponent’s goal in search of the winner. With three minutes remaining, Sean O’Farrell held off a defender to turn on the edge of the area and crash a shot into the roof of the net. The pendulum had swung in favour of the Patrick Street team who looked odds on to finish top. Smurfits needed to win their penultimate fixture at home to Aer Lingus to stay alive and force an incredible play-off. While Roches Stores met Cara Partners at Turner’s Cross in the final of the blue ribbon event of the league’s calendar, the Mooney Cup Final on Sunday, May 5th (winning 4-1 ), Smurfits took the field less than a mile away against Aer Lingus in what transpired to be an anxious 90 minutes, as goals by Fionan O’Neill and McCarthy cancelled out Martin Surgure’s tenth-minute opener for the Airport eleven, to set up a play-off at Turner’s Cross a week later.

Cup final official and referee of the year Ger O’Donovan was appointed to oversee what was sure to be an emotionally charged encounter. The match burst into life in the 17th minute when, after a break down the right, Frank McCarthy gained possession before hitting an unstoppable 20 yard drive past Liam O’Callaghan. Both teams played with passion and commitment to the interval with Roches receiving a double blow on the hour with captain Denis Kennedy missing a penalty and Aidan McSweeney’s being dismissed for dissent after venting his anger following an apparent foul during the rebound from the penalty shortly afterwards. To their credit the ten men persisted to find a route back into the match through John O’Neill’s 70th minute deflected free-kick. With ten minutes remaining a shout for offside was turned down when Dave O’Connell’s low-struck free out on the touchline came off Paul Foley to be pounced upon by Fionan O’Neill, who slotted home to bring the curtain down on a memorable first season in the top flight for Smurfits and their jubilant managers, Dave O’Connell and Denis Cambridge.Smurfits heroes were inspirational captain Wayne Searls, Declan White, Michael O’Mahony, Paul Foley and strikers Fionan and Owen O’Neill along with Frank McCarthy.

? The Smurfits FC squad pictured before the First Division play-off encounter with Roches Stores at Turner’s Cross on Sunday, May 12th 1996

? The Roches Stores FC squad who faced Smurfits in the First Division play-off a Turner’s Cross on Sunday, May 12th 1996 a week after winning the AIB Cup against Cara Partners (4-1). 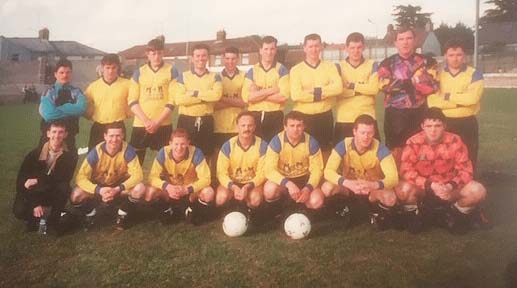